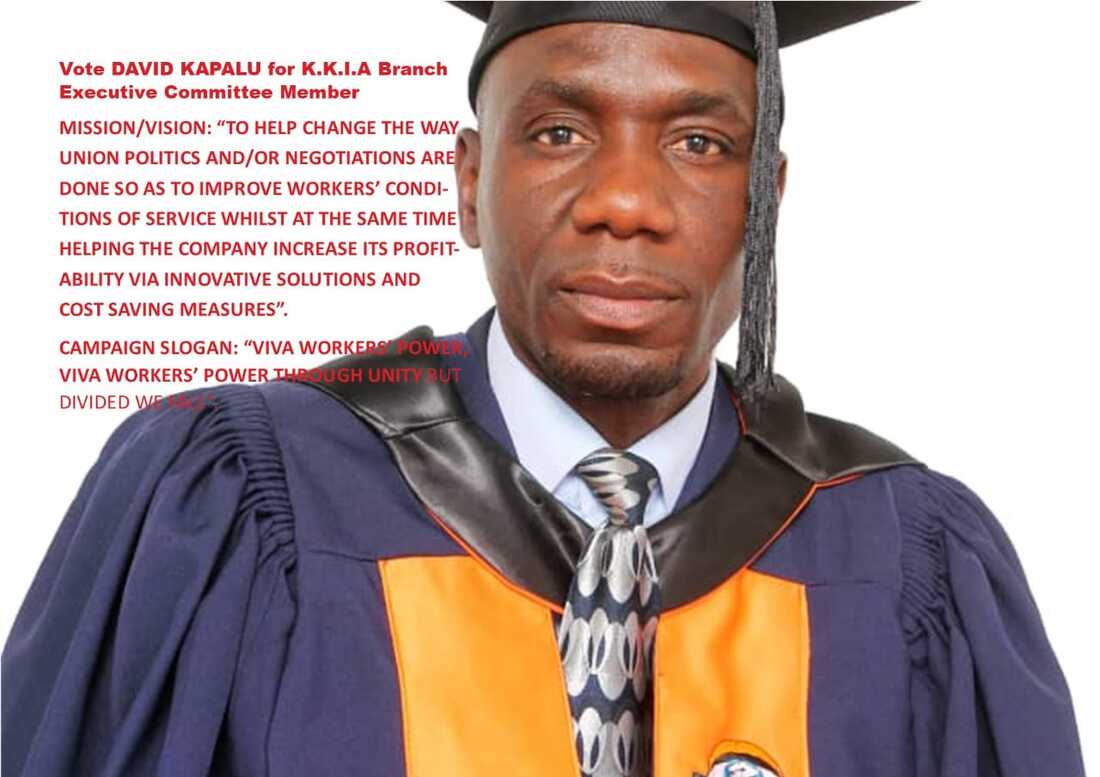 Mission/Vision: “To help change the way union politics and/or negotiations are done so as to improve workers’ conditions of service whilst at the same time helping the Company increase its profitability via innovative solutions and cost saving measures”.

​WHY VOTE FOR DAVID KAPALU?

​The reason why you should give me a vote is because I bring to the negotiation table a unique set of skills both education-wise and experience-wise that I shall apply when engaging in collective bargaining either individually or collectively with my fellow union executive members. After all, what is collective bargaining anyway? Collective bargaining is NOT collective fighting or collective quarreling against another. Neither is it individual fighting or individual quarrelling against another individual. But rather, collective bargaining is, according to Wikipedia, “a process of ‘negotiation’ between an employer and a group of employees (via trade union representatives) aimed at agreements to regulate working salaries, working conditions, benefits, and other aspects of workers' compensation and rights for workers. The interests of the employees are commonly presented by representatives of a trade union to which the employees belong to. The collective agreements reached by these ‘negotiations’ usually set out wage scales, working hours, training, health and safety, overtime, grievance mechanisms, and rights to participate in workplace or company affairs”.

Moreover, I have also identified lacunae or gaps in our current NUAAW Constitution that needs urgent attention and eventual correction such as for instance total exclusion of ordinary members’ say in the management and control of the union’s affairs in financial, investment and/or even administrative issues! This I believe is a very serious gap that needs to be urgently addressed so as to ensure good corporate governance practices in the union that will instill a sense of confidence and trust in the current Union Leadership and beyond!

Therefore, when duly Voted in as a Committee Member, I shall advocate on behalf of the General Membership to my fellow Union Executive Members that Article 8 of the current NUAAW Constitution be amended to include another equally important Organ or Structure of the Union namely the “Annual General Meeting of Members”. This Annual General Meeting of Members will be a key stakeholder Organ or Structure of the Union which will provide Proper Checks and Balances on how the affairs of the trade union are handled especially issues pertaining to how finances and/or investments are used and/or applied by union leaders. And this position seems to be the rationale behind sections 61 and 62 of the Industrial and Labour Relations (Amendment) Act of 1997 of the Laws of Zambia which provides for how union monies are supposed to be used or applied and how a member of a union can prevent or challenge union monies being misused or misapplied by union executive members. However, currently as things stand in the current NUAAW Constitution, ordinary members of the union have been reduced into mere spectators instead of being major stakeholders in the day to day running of the general affairs of the union in spite of them being major contributors of monies that sustain the union. Besides this, there are also other lacunae in the NUAAW Constitution that I have identified which need correction but space cannot allow me to highlight these here! Maybe this is a topic for another day!!!

Another equally very important matter I thought I must bring to the attention of the General Membership is that of those of our Colleagues in the Union holding the position of Union Trustee. You see, the position of Trustee in the Union is a very important and key position in the sense that if the union were to be sued or wishes to sue, it is the Trustees who bears this responsibility on behalf of the Union. This means that it is the responsibility of the Union Trustees to ensure that the funds or monies of the Union and other matters are properly applied failure to which the Trustees risk being held personally liable for breach of this duty. This is in line with section 27 of the Industrial and Labour Relations (Amendment) Act of 1997 of the Laws of Zambia which provides as follows, “A trustee of a trade union shall not be liable to make good any deficiency occurring in the funds (or monies) of the trade union unless such deficiency occurred due to neglect or willful default on the part of the trustee”. What this means therefore is that where negligence or willful default occurs or is rather proven against the trustees of a trade union, then the trustees will be held liable on behalf of the trade union and sometimes even personally liable depending on the gravity or circumstances of a particular case. So, Trustees whether present or past need to be extremely careful in how they administer the affairs of a trade union!

​SO, WHAT UNIQUE SKILLS AM I BRINGING TO THE UNION IF VOTED IN?

1. I’m a Lawyer as defined by section 2 of the Law Association of Zambia Act, Chapter 31 of the Laws of Zambia! What this means is that I shall be able to represent and protect your interests and/or rights effectively from a well-informed legal perspective!

2. Have 17 years of work experience in the Aviation Industry thus making me a Perfect Candidate for the Position of Committee Member as I understand what You the General Membership really want achieved in terms of Your improved conditions of service and other matters put together!

3. Have Several Years of Business Acumen and/or Experience Garnered from My Own Side Hustle Private Business Endeavors - (see:www.davikrealestate.com): This will benefit the Union, the Company and the General Membership of the Union in many ways which will result in positive contribution regarding how Union and/or even Company funds are utilized to the benefit of all.

After All, What Is The Main Role or Main Job of a Leader in an Organization in General? Well, Here It Is:

a) Clearly define the Mission, Goals and Vision of the Organization;

b) Find the Best People and Forge them into a Successful Team;

c) Strengthen the Organization on the Inside;

d) Expand the Organization on the Outside;

e) Improve the Bottomline or Profitability of the Organization;

g) Invest in Tangible Assets, and last but not the least;

h) Be a Good Corporate Citizen!

Therefore, Vote DAVID KAPALU as K.K.I.A Branch Executive Committee Member of NUAAW for Better and/or Improved Representation and Protection of Your Workers’ Conditions of Service, Interests and/or Workers' Rights!!!!!

Mission/Vision: “To help change the way union politics and/or negotiations are done so as to improve workers’ conditions of service whilst at the same time helping the Company increase its profitability via innovative solutions and cost saving measures”
Site Created by David Kapalu - Copyright © 2022 All Rights Reserved